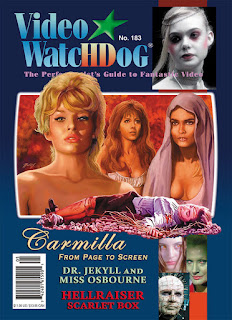 Some sad news has come to my attention today. For those of you who are a little "old school" like me, and enjoy physical products (books, DVD's/Blu-Ray's, magazines, etc), then it saddens me to tell you all that one of the last genuinely useful and resourceful genre magazines being published, is no more!


VIDEO WATCHDOG (VW), which started in 1990, has ceased to be, and has filed for bankruptcy too!

Published by genre stallwart Tim Lucas, and his wife, Donna, the magazine was a DVD-sized digest magazine/journal, published every couple of months, covering all aspects of the horror, sci-fi, fantasy and cult film genres. Detailed and authoratitive articles about films from all corners of the globe, including extensive reports on censorship, alternative cuts/variants of films, this was a horror fans Bible!

Yesterday, the following notice was posted on the VW website...

With regret, we must announce that—after 27 wonderful years—we are no longer able to publish new print editions of Video Watchdog.

Some of you have been with us since the early days of "desktop publishing," when bookstores carried a wide variety of offbeat publications catering to all kinds of niche readerships. It was an exciting time, one in which Video Watchdog thrived. From the time of our first pre-publication ads in 1989, The Perfectionist's Guide to Fantastic Video has never stopped evolving—growing from 60 to 64 to 80 pages in its black-and-white configuration, blossoming into full-color with issue 100, and introducing interactive digital versions of each issue in 2013. We can confidently state that our most recent issues were among the best we ever published.

Over the last quarter century, we have always depended on newsstand sales, subscriptions, advertising, and—because all of that was still not fully sustaining—side projects in order to continue publishing. We were able to make ends meet so long as all of these facets were working together but, in recent years, it has become a losing battle. There are many reasons for this: the diminishing number of retail outlets, the sad state of print distribution, the easy availability of free information and critical writing via the Internet, and the now-widespread availability on Blu-ray and DVD of so many of the once-obscure titles Video Watchdog was among the first to tell you about. After trying many creative ways to generate sales to compensate for newsstand losses and lack of advertising support, rising shipping and postage costs, and a depressed economy, it is simply no longer possible to keep Video Watchdog moving forward.

Looking back, we take great pride in the fact that, in our time, Video Watchdog was able to present the writing and original art of the genre's most talented writers, artists, and thinkers; that it attracted the attention and respect of so many of the great contemporary masters of cinema (from Scorsese to Del Toro); and that its coverage inspired a number of people to enter the film and video businesses to promote film restoration and preservation from the inside. We are deeply grateful for the contributors and audience that enabled us to sustain our publication for so long.

The coming months will be difficult as we try to figure out what's next for us, and what awaits Video Watchdog and its readership. Please bear with us during this uncertain time, and we will keep you informed of further developments as they become more definitive.

Sadly, if you didn't live in the USA, then it was becoming harder and harder to get hold of the magazine. For me, despite being a subscriber, I was getting two or three out of every six issues being published. At £7.50 UK / $11.95 US, it was a pricey title, and whilst it was always worth reading, it was extremely frustating not knowing whether I would get the next issue or not, and often being told "The Distributor hasn't sent us any copies this month, and we can't get order any other copies either. Sorry." was not what a regular reader wanted to hear. I fear that the distributor's have only exacerbated the problems for Tim and Donna, which has lead to the publication's hasty demise.

Irrespective, I wish them both in their future endeavours, and hope that this excellent publication can, and will, be resurrected in the near-future, in one form or another. It would be awful to see Video Watchdog just vanish from the world of cinema journalism.
Posted by Pooch at 9:03 pm